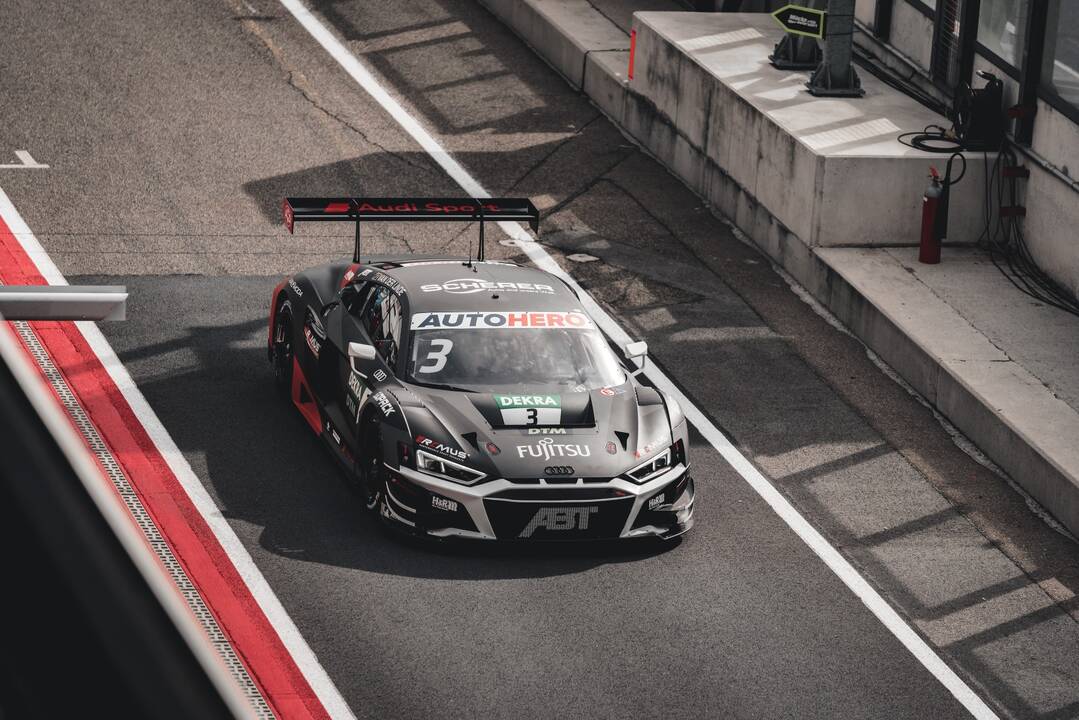 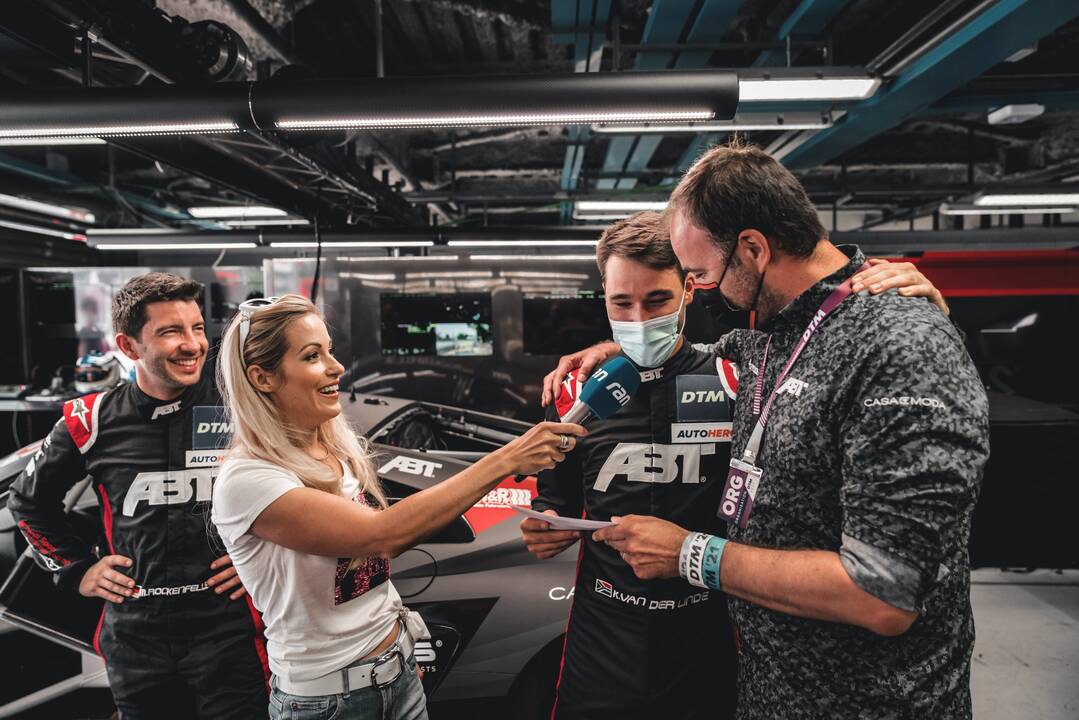 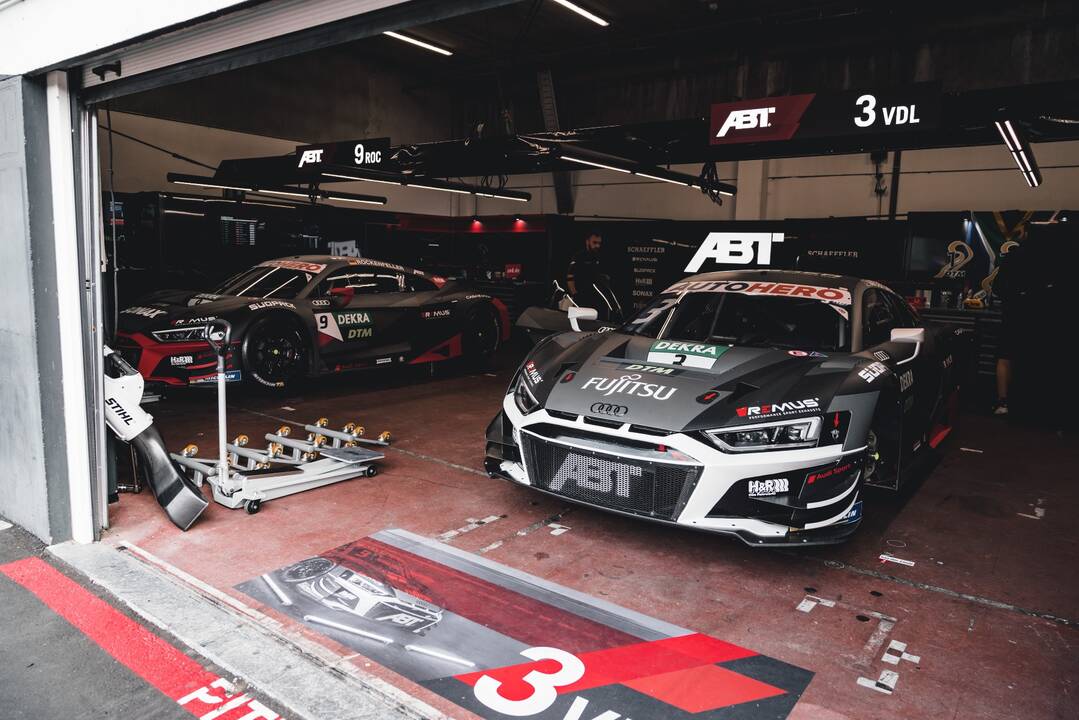 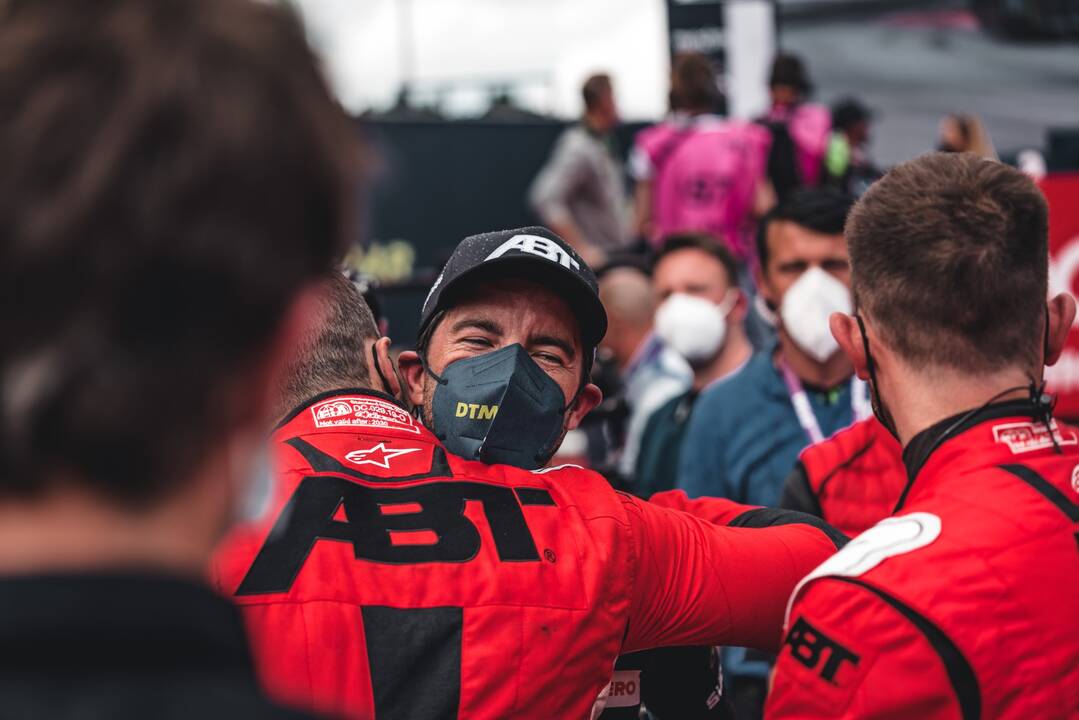 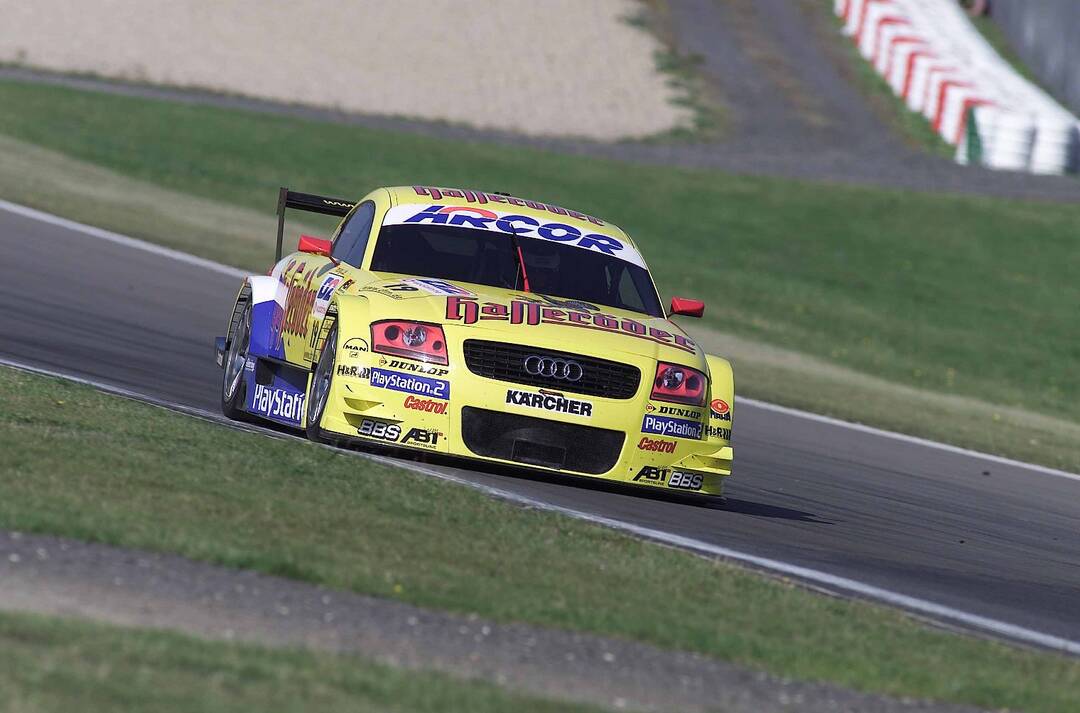 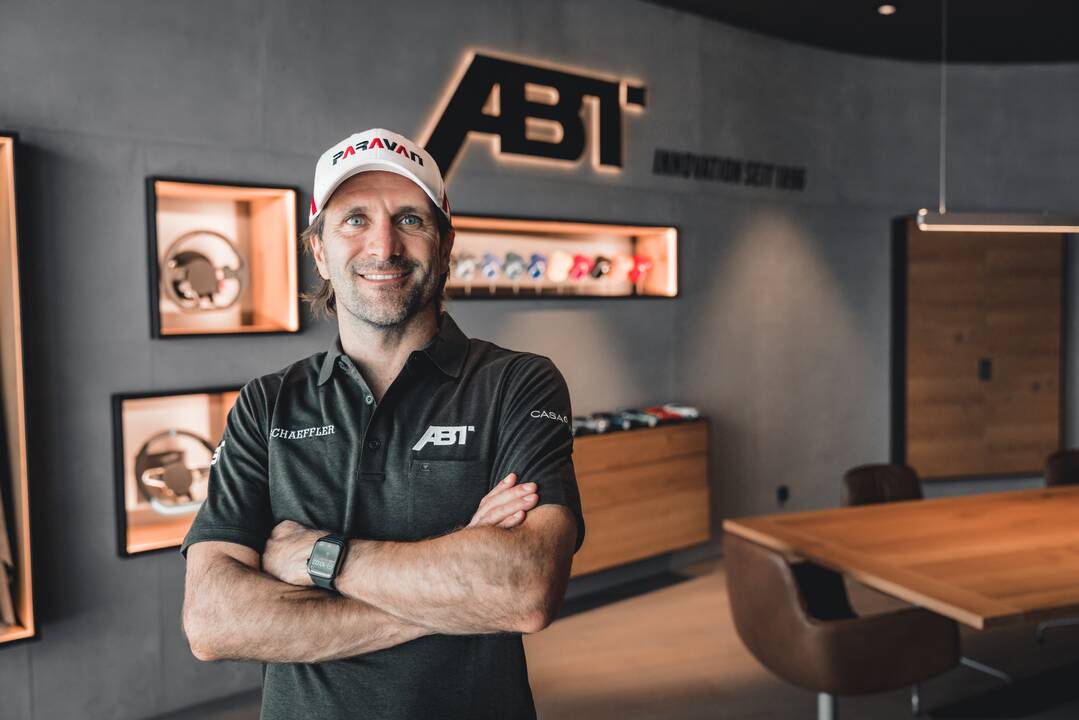 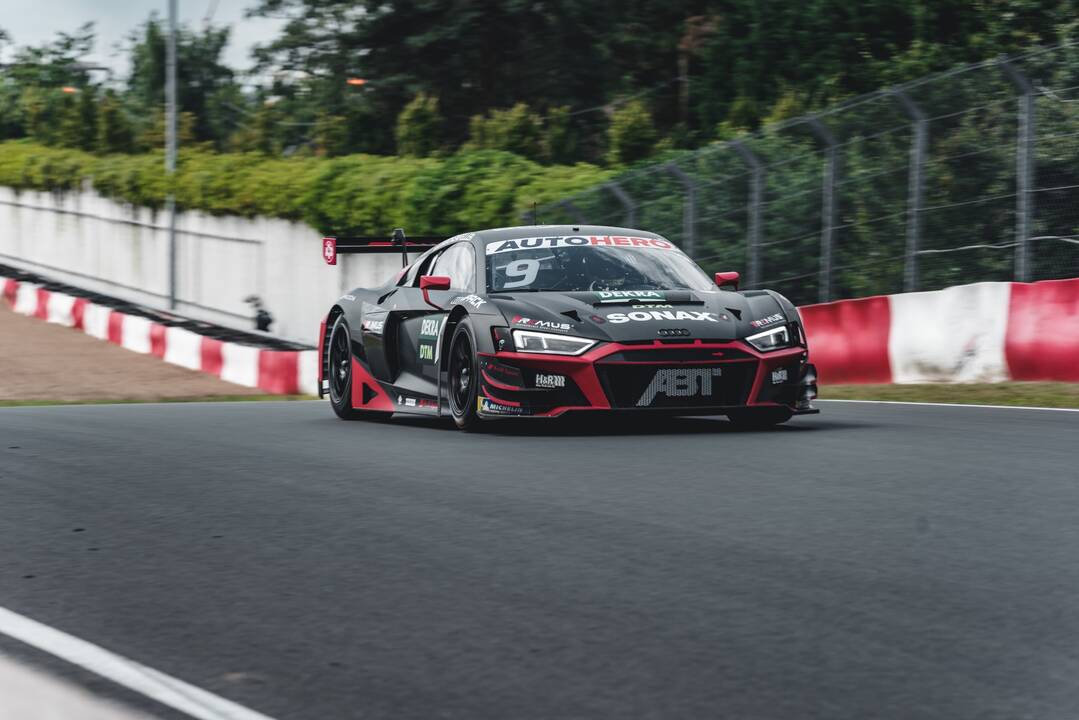 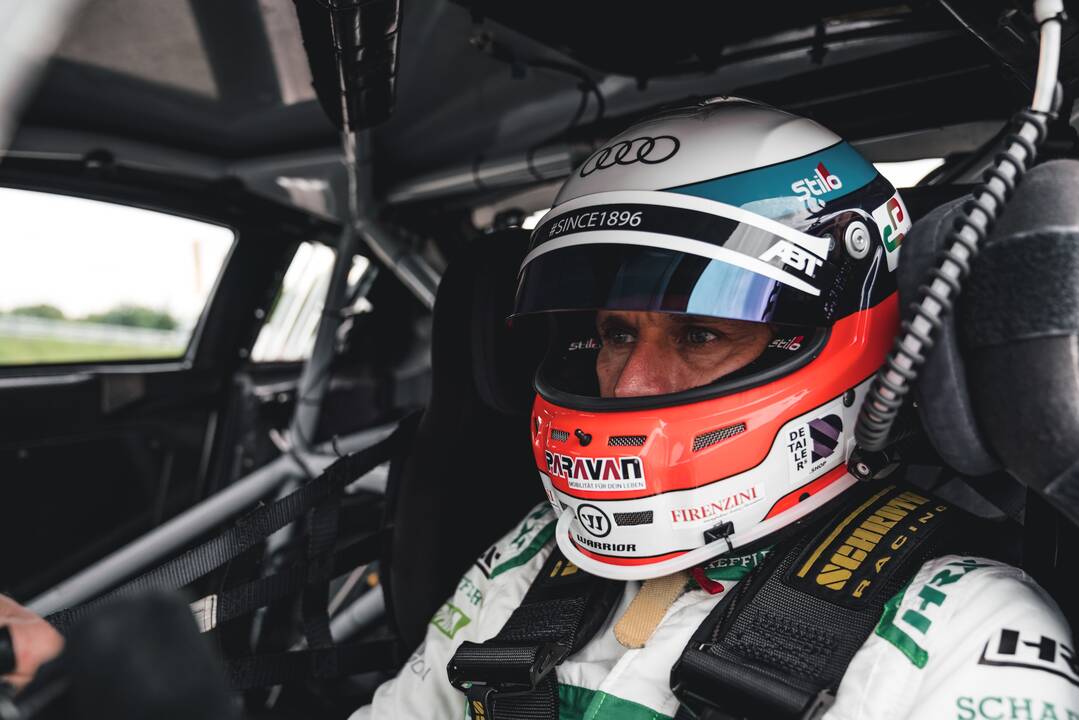 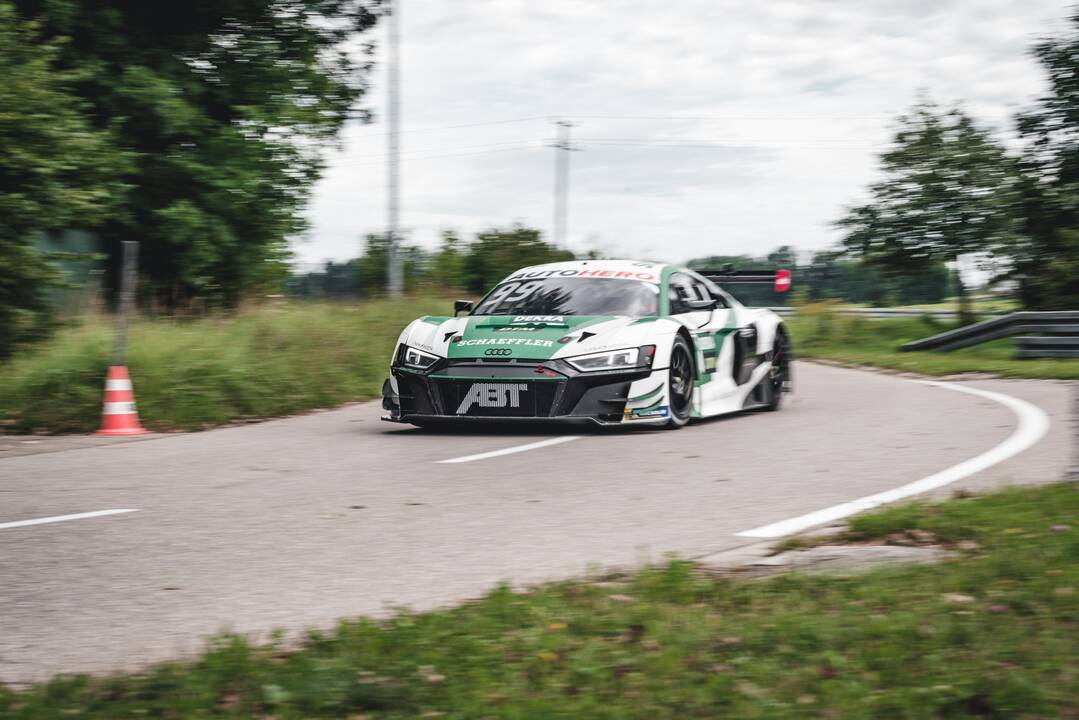 ABT, the DTM and the Nürburgring: a Love Story

Next weekend, the first half of the DTM season will come to an end at the Nürburgring. The ABT Sportsline team, which is competing in the DTM as a private team for the first time since 2003, enjoys an impressive record: Kelvin van der Linde has already won two races and leads the drivers’ standings by 21 points. ABT Sportsline is also in first place in the team standings.

Just like van der Linde, Mike Rockenfeller has also scored points in all six races so far.
Expectations are correspondingly high ahead of the two races on the sprint circuit of the Nürburgring (Saturday and Sunday both from 1 PM CEST live on SAT.1 and ran.de), especially as ABT Sportsline has particularly good memories of the traditional circuit in the Eifel. In 31 races, the team led by Hans-Jürgen Abt and Thomas Biermaier has celebrated 13 victories and another twelve podium finishes. These include some very special triumphs.

Above all, 6 May 2001 is unforgotten in the Johann-Abt-Strasse in Kempten. On that Sunday, the Frenchman Laurent Aiello clinched the first victory for Team ABT Sportsline in the DTM with the compact Abt-Audi TT-R at the Nürburgring. “For us, today is one of the most important days in our company history,” said Hans-Jürgen Abt at the time. “We took a lot of punishment last season. But we never gave up, we always fought on. This success belongs to every single team member.”

The Abt Audi TT-R developed by ABT Sportsline was almost unbeatable at the Nürburgring afterwards as well. In August 2001, Aiello also won the second Nürburgring race of the season. In 2002, the Frenchman was only beaten by Uwe Alzen in a Mercedes by 0.348 seconds in a photo finish. The fact that he was able to keep Bernd Schneider behind him was, however, a very important step on the way to later winning the title. In 2003, Aiello was once again in front for ABT Sportsline – again after a thrilling battle with Uwe Alzen.

With his three victories, Aiello is still the most successful ABT driver at the Nürburgring. Mattias Ekström, Martin Tomczyk, Nico Müller and Robin Frijns each triumphed twice. The other two winners’ trophies came from Edoardo Mortara and Miguel Molina.

Today’s SAT.1 expert Martin Tomczyk was extremely strong at the Nürburgring: In 2007 and 2009, he dominated at will in the Eifel and spoke afterwards of “pretty easy races”.

Miguel Molina’s victory in Sunday’s race in 2015 was not an everyday occurrence either: the Spaniard needed 67 attempts for his first victory in the DTM, but it was all the more in a dominant style with a margin of 7.5 seconds.

Mattias Ekström achieved a completely different feat at the Nürburgring: The Swede secured pole position in the first night qualifying of the DTM in 2003. However, Ekström also has dark memories of the sprint circuit, where the time gaps in qualifying are usually minimal: In 2015, he found himself in 17th place on the grid twice in the middle of the thrilling title fight.

Last year was almost picture-perfect for ABT Sportsline: due to the pandemic, four DTM races were held at the Nürburgring within eight days. The team from Kempten won all four and even crowned the “Nürburgring festival” for ABT with a 1-2 victory in the end – just like a fortnight ago in Zolder.

In 20 years of DTM at the Nürburgring, there have, of course, also been setbacks. In 2003, Mattias Ekström hold a commanding lead, but there was a problem with the right rear wheel during both pit stops. In 2006, the Swede started with too little revs and dropped to 14th place. In 2017, “Eki” changed from wet weather tyres to slicks in Saturday’s race just as it started to rain again.

In 2008, the often capricious Eifel weather caused one of the most curious scenes in DTM history: Because the meteorologist hired by Audi predicted heavy rain even during the formation lap, all Audi drivers set off on a dry track with rain tyres – a big mistake, as it turned out only a short time later. ABT Sportsline did damage limitation by having Mattias Ekström and Timo Scheider come back to the pits at the end of the formation lap to change back to slicks. Today’s ABT driver Mike Rockenfeller started from row one at that time but had no chance with the rain tyres on a dry track.

Markus Winkelhock, on the other hand, has the best memories of the Eifel weather: in 2007 Winkelhock made Formula 1 history at the Nürburgring when he replaced Christijan Albers at Spyker and led the Grand Prix on his debut in the early stages after being the only driver to switch to rain tyres before the start. The Swabian is piloting the #99 ABT Audi R8 LMS this weekend, which is normally driven by Sophia Flörsch. The 20-year-old is missing due to a clash of dates with the 24-hour race in Le Mans.

Quotes before the DTM races at the Nürburgring

Thomas Biermaier (Team Principal Team ABT Sportsline): “It is a positive signal that races can be held again at the Nürburgring after the terrible flood disaster. The region simply lives from motorsport and major events like the DTM. The Eifel is not our home, but for ABT it is like a second home. We’ve competed in a lot of races at the Nürburgring and celebrated our first DTM victory there in 2001. In the meantime, there have been 69, which means that our next success will be a well-rounded one. Kelvin and Mike can do it in the DTM at any time. And I’m really looking forward to seeing where Markus places himself with the Space Drive system at the Nürburgring.”

Kelvin van der Linde (ABT Audi R8 LMS #3): “I’ve had a lot of cool races at the Nürburgring in the past in the ADAC GT Masters. I feel comfortable there. We haven’t tested at the Nürburgring, so it’s a bit new territory for us as a team. Nevertheless, I think our package fits. We’ve shown that we can do well with our ABT Audi R8 LMS on any type of track – whether it's ‘high downforce’ or ‘low downforce’. So the goal is once again to extend our lead in the championship.”

Mike Rockenfeller (ABT Audi R8 LMS #9): “I’m particularly looking forward to the Nürburgring for a number of reasons: After Lausitzring and Zolder, I have a bit of a tailwind. It’s still a kind of home race for me. And we have spectators on site again. My speed with the car has been good lately, so I’m hoping for two good results. The track is demanding and you should perhaps be able to overtake a bit better than last time in Zolder. I expect exciting races. And qualifying will be super close and decisive again.”

Markus Winkelhock (ABT Audi R8 LMS #99): “I drove for ABT for the first time at Oschersleben in 2007. Back then I was a substitute for Tom Kristensen, who had a serious accident at Hockenheim. That was my very first race for Audi in the DTM. To be back in the DTM after ten years of abstinence and to be able to take the wheel for ABT again so many years later is something very special. I’m really looking forward to it. The Nürburgring is one of my favourite circuits. In this respect, I hope that I can achieve a good result there for ABT.”

... at the Nürburgring a guest will be sitting at the ABT Sportsline pit stand? A bidder from the Allgäu region bought the seat for 6,000 euros in aid of the #wirfuerdieeifel campaign.

... Kelvin van der Linde and Mike Rockenfeller will be answering questions from media representatives at the Zoom press conference of the DTM on Wednesday at 11 a.m. CEST?

... Markus Winkelhock will take part in the DTM press conference on Friday?

... ABT partner Fujitsu will “kidnap” Kelvin van der Linde and his ABT Audi R8 LMS for filming on the Nürburgring-Nordschleife on Thursday evening?

... Mike Rockenfeller is back on Instagram at rockenfeller.mike to the delight of his fans?

... Kelvin van der Linde supported Team Audi Sport ABT Schaeffler in the simulator during the Formula E World Championship finale in Berlin between the DTM races at Zolder and at the Nürburgring?

... Sophia Flörsch will be competing in the 24-hour race at Le Mans next weekend and would like to follow the DTM action from there “as closely as possible”?

ABT dates for the media: