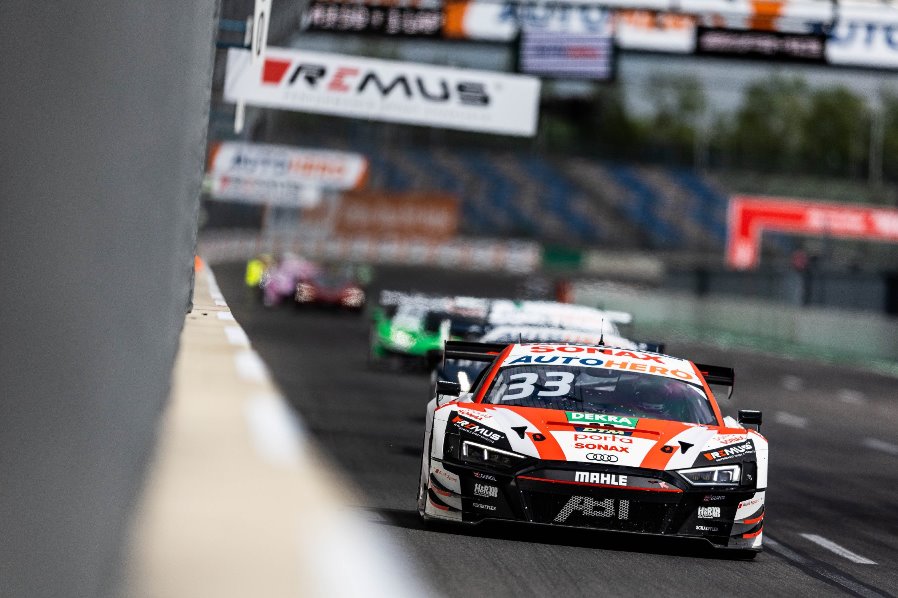 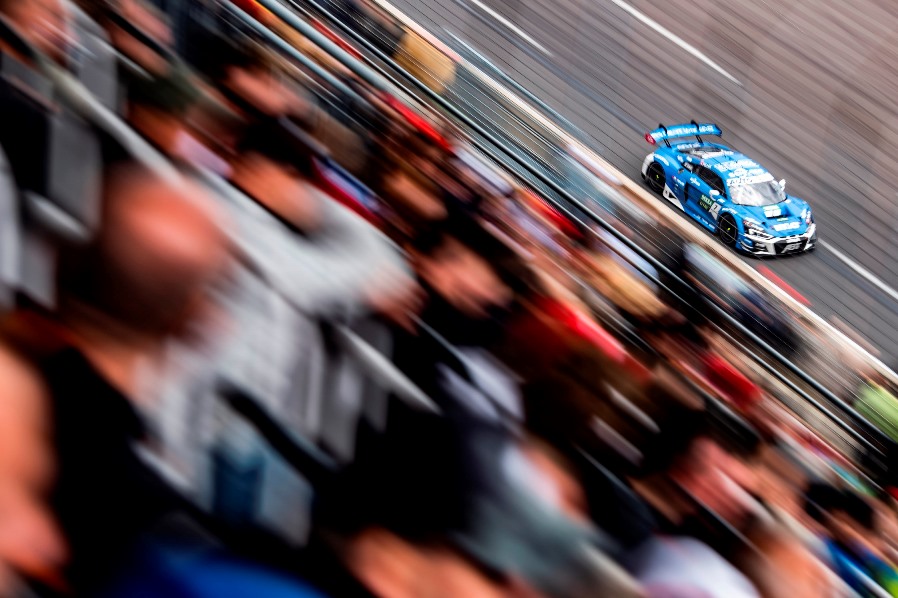 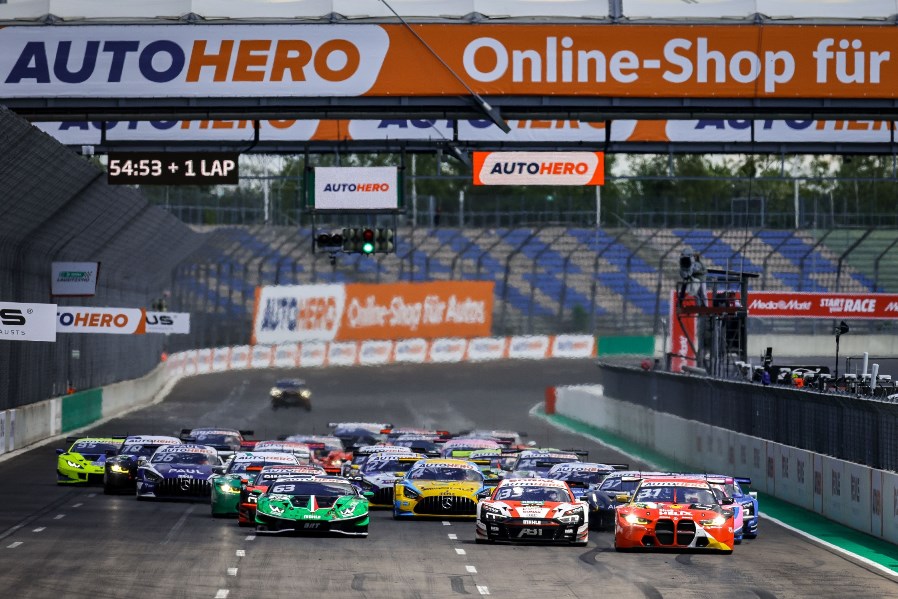 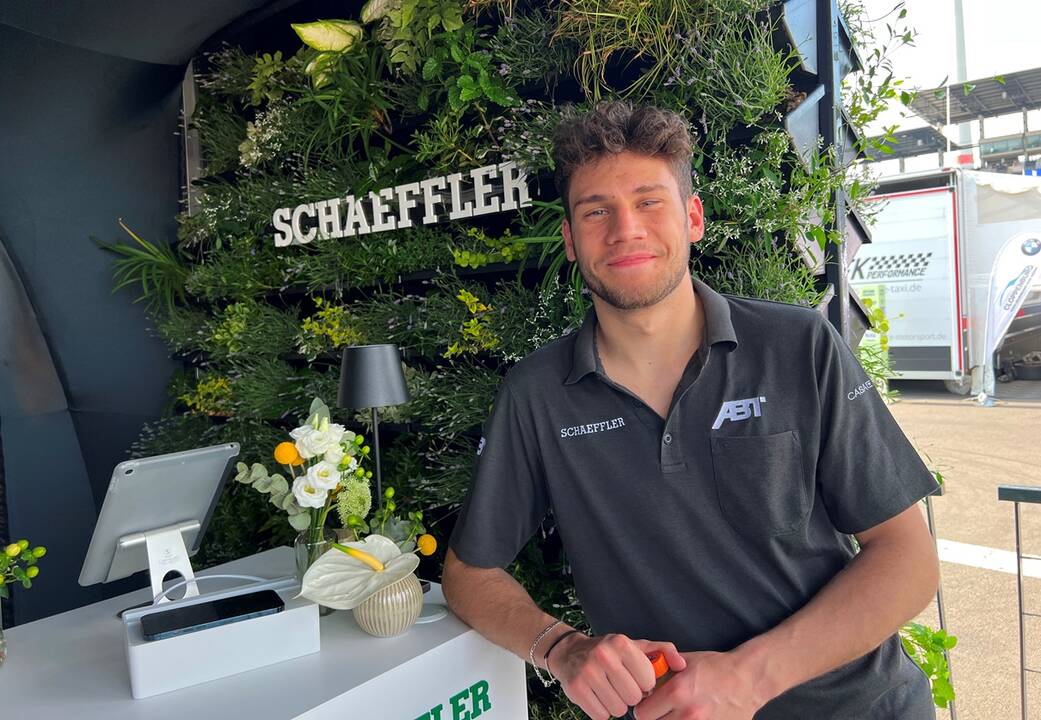 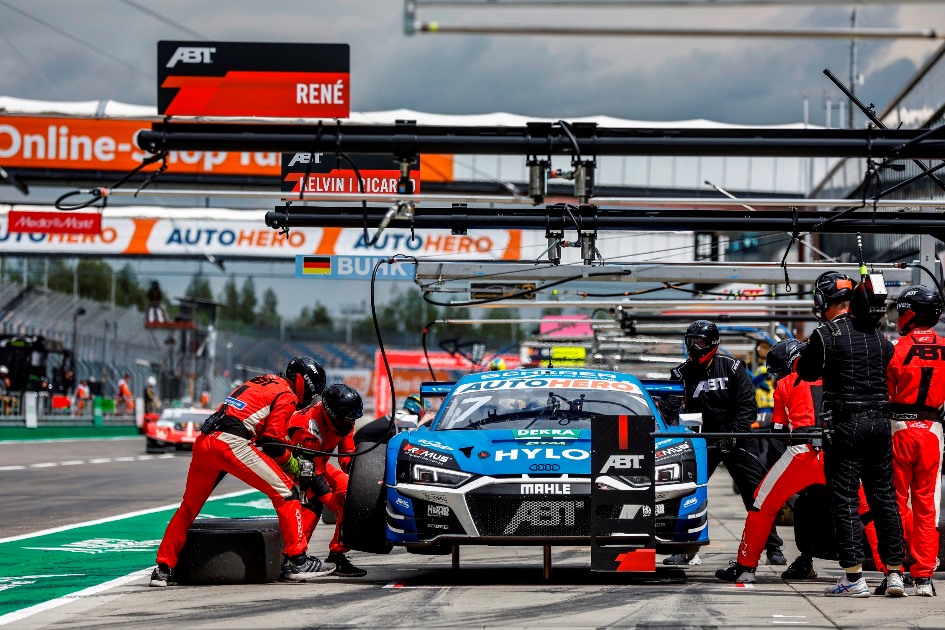 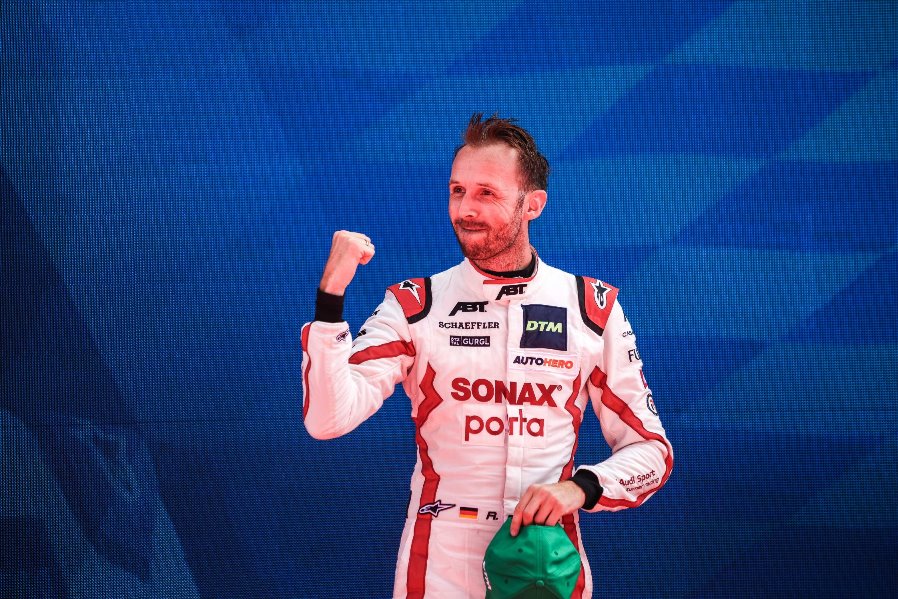 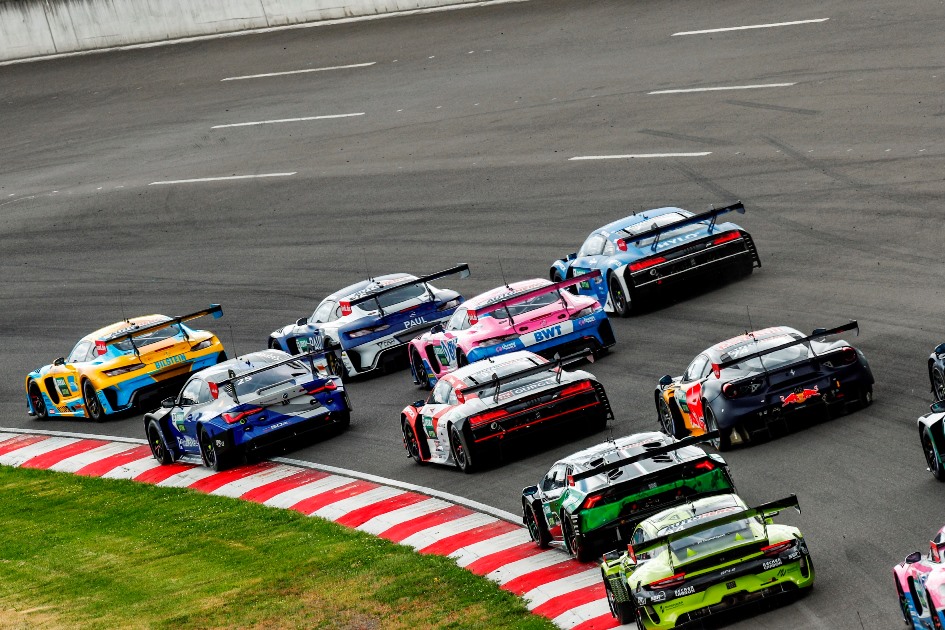 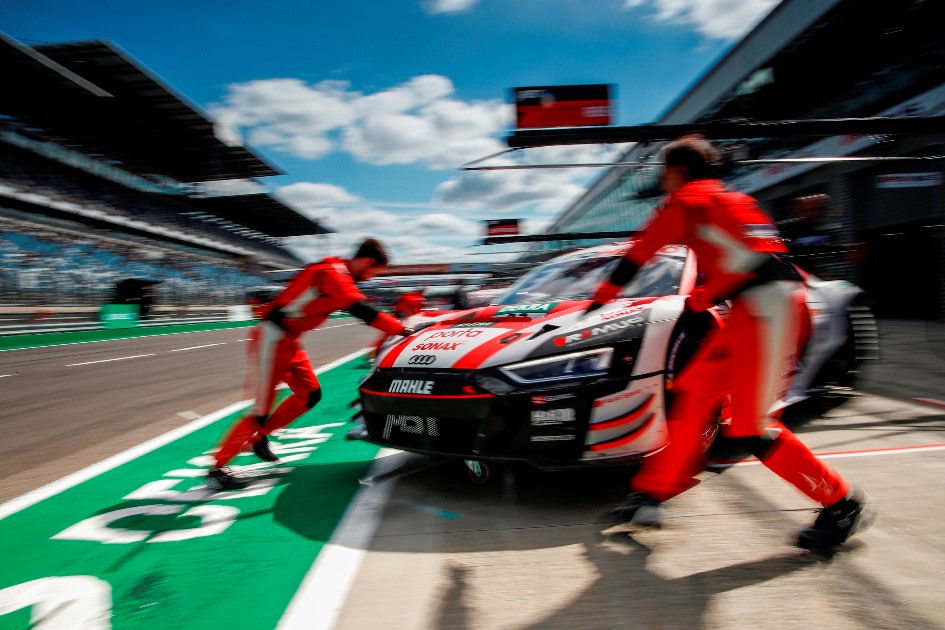 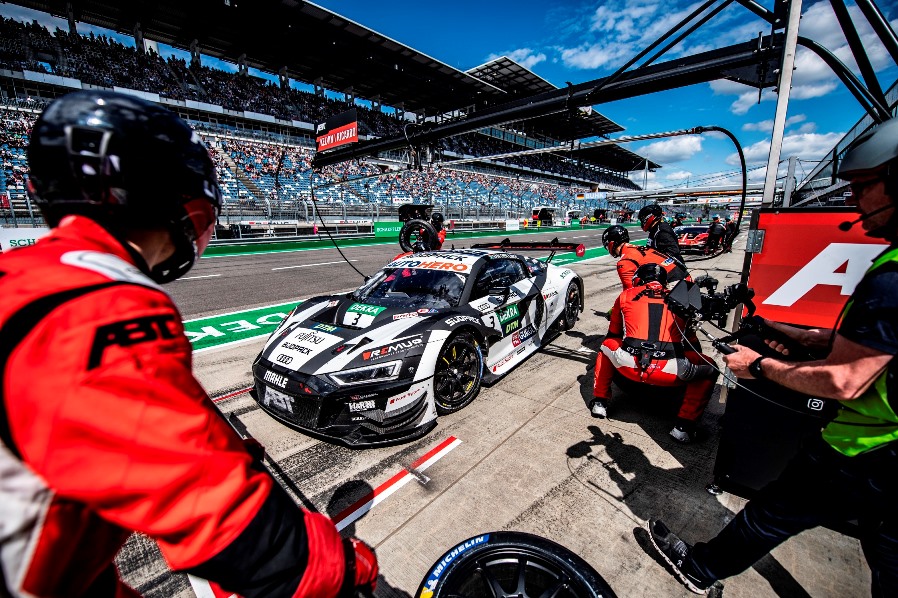 ABT Sportsline and René Rast: first podium with team spirit

With hard work and team spirit, ABT Sportsline and René Rast scored the first podium in the 2022 DTM at the Lausitzring. The three-time DTM champion scored points with eighth place in Saturday’s first race and thus achieved the first personal goal of his comeback season. But Rast was anything but satisfied with his ABT Audi R8 LMS GT3 evo II on Saturday. His two team-mates Kelvin van der Linde and Ricardo Feller also reported that their cars were extremely nervous on the undulating Lausitzring.

The ABT Sportsline engineers put their heads together and searched for solutions until late in the evening. On Sunday, the three ABT drivers started with different set-up philosophies. René Rast’s car was modified particularly radically, which is why even the crews of the other two cars helped out.

The night shift was rewarded: René Rast took second place on the grid on Sunday and was able to fight in the leading group right from the start of the second race. The ABT driver crossed the finish line in third place just 1.187 seconds behind double winner Sheldon van der Linde – in a BMW which was dominating at the Lausitzring – and Maro Engel’s Mercedes plus the certainty of having definitely arrived back in the DTM. With 21 points, Rast is now the best-placed ABT driver in the drivers’ championship.

DTM rookie Ricardo Feller again put in a strong performance: The Swiss was the fastest Audi driver in qualifying on Saturday and was also fast in the first race until he suffered a puncture. It is not yet clear why the right rear tyre suddenly lost pressure.

On Sunday, Feller achieved the best qualifying result of his still young DTM career with fifth place on the grid. After a not perfect pit stop and some fierce battles on the track, the Swiss finished seventh and scored points for the third time in four DTM races.

Kelvin van der Linde, who narrowly missed out on victory at the Lausitzring last year, had a weekend to forget. The South African struggled with the handling of his R8 and found himself in grid positions 19 and 15, which were completely unusual for him. This time, he did not manage to fight back as he was able in the first race at Portimão.

Quotes after the DTM races at the Lausitzring

Thomas Biermaier (Team Principal): “The Lausitzring weekend was an improvement on Portimão. We are not quite where we want to be yet and still have some work to do to really understand the evo II. But I am incredibly happy for René. He earned his first podium with hard work. His whole crew did a good job. Ricardo is strong on one lap. There are still a few things were we can improve in the race. And we will build up Kelvin again after this weekend. We will do everything we can to get him back to his old strength at Imola.”

Kelvin van der Linde (ABT Audi R8 LMS GT3 evo II #3): “The Lausitzring weekend was extremely difficult for me. We simply did not have the pace. That was already apparent on Friday. But we are not hanging our heads. We will work hard, find out what the problem was and then fight for the podium again at Imola. I am confident that this will work – especially when I see how well René did on Sunday.”

Ricardo Feller (ABT Audi R8 LMS GT3 evo II #7): “After the puncture on Saturday, it was nice to finish the second race on Sunday and score points. The guys did a great job, the pit stop on Saturday was mega. We still have to work a bit on the race pace, but I’m already looking forward to Imola and feel really comfortable in the DTM and in the Team ABT Sportsline.”

René Rast (ABT Audi R8 LMS GT3 evo II #33): “I am mega happy! I didn’t expect such a good points haul before the weekend. What makes me even happier is that we made a huge step forward with the set-up from Saturday to Sunday. I felt much more comfortable in the car, it was really easy to drive. You could see the result: I was able to fight at the front, and we can build on that now. After Portimão I was quite frustrated, but now I am more motivated than ever. Thanks to the whole team who worked extremely hard.”